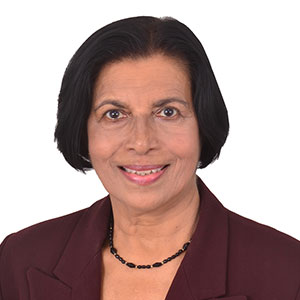 Ambassador (Retd.) Geetha de Silva is the Executive Director of the South Asia Policy and Research Institute (SAPRI) based in Colombo. She was a member of the Sri Lanka Foreign Service and her last diplomatic assignment was as High Commissioner of Sri Lanka to Canada.

She has participated in and contributed to international and regional conferences while she was at the Ministry of Foreign Affairs and after retirement from the Ministry, during her tenures at the Regional Centre for Strategic Studies(RCSS), Sri Lanka, as Associate Director(2007-2010), at One Text Initiative(OTI), Sri Lanka, as Director (2010-2012) and during her present assignment (2012 onward).