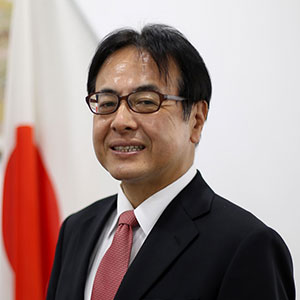 Ambassador MIZUKOSHI Hideaki handed over his credential and started to serve as the Japanese Ambassador to Sri Lanka since 16 November 2021. He served as the Director-General, Intelligence and Analysis Service, at Ministry of Foreign Affairs of Japan in 2019.

H.E. MIZUKOSHI followed the Bachelor of Arts Degree at the Faculty of Law, University of Tokyo. He started his career in the Ministry of Foreign Affairs in 1985 soon after his graduation. H.E. Mizukoshi worked as Assistant Vice-Minister, Minister’s Secretariat and Global Issues Cooperation Division in 2014. In addition, he served as the Minister in Embassy of Japan in USA in 2011, Embassy of Japan in Republic of Korea in 2010 and Embassy of Japan in France in 1999